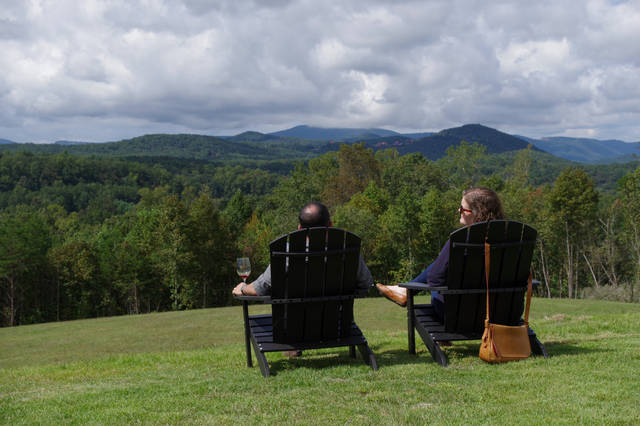 Surry County will have a new wine-growing pocket starting in 2021 as Serre Vineyards gets up and running on the west side of the county.

The site is located on Beast Trail, a gravel drive off New Life Church Road in the Blevins Store community on the Fisher River.

The vineyard will start small in 2021, building up over time, but the wine making and tasting have already begun.

“We have been planning the property for about three and a half years,” said Christian Krobisch, who is starting the venture with his bride, Melissa Hayes, whom he married last year.

“We just opened the tasting room about a month ago now. The vineyard will be planted in the spring of ’21 — because we just cleared land last year and the soil is too acidic. We have 70 acres of property here, up to 10 cleared right now for vineyard. … We’ll have a 2-acre vineyard right in front of the barn.”

There is a lot more than 70 acres to view from the high spot looking out upon the foothills leading up to the mountain range.

“I’m originally from upstate New York; I moved to Charlotte about 25 years ago,” said Krobisch.

What did he do in Charlotte?

“I’m still in finance. I work for an asset manager. I’ve been in financial services for 25 years. With COVID now, I’ve been working from home … out of our house down in Mount Airy.”

What does this money man know about wines?

Those interests were spurred during his childhood and grew further in adulthood.

“I’m first-generation American, so my family coming from Europe, we traveled around Europe a lot: Italy and France, Austria and Switzerland and Germany. I just fell in love with the culture and the history of Old World wine.”

What is a favorite destination?

“I’ve been to Germany probably 15 to 16 times in my life. My family is from Germany. The Rhine River Valley is absolutely beautiful — the vineyards come right down to the river. My favorite town is called Rüdesheim, which is this little village underneath this amazing castle. And there’s hiking and biking and great food, wonderful people. It’s probably my favorite place in the world.”

The couple said they visited a winery elsewhere in this state a few years back and were amazed at how good the quality was. That got Krobisch thinking about what the soil could produce here.

“North Carolina offers some of the most unique and special conditions for winemaking. Only areas with distinctive climates, soil and elevations earn the prestigious designation of an American Viticultural Area. North Carolina is home to five of them, including Yadkin Valley — the state’s first AVA.”

The couple wrote on their business website, “Craft beer has put North Carolina on the adult beverage map. With over 300 microbreweries and brewpubs, we stake claim to the largest craft beer scene in the South. But there’s another ‘scene’ in NC that gets overlooked far too often: North Carolina wineries.

After research, Krobisch and Hayes were prepared to give this venture a try.

“We bought this property about three and a half years ago. We were looking for a place to have out in the country, have the kids play outside. We have a beautiful riverfront: Fisher River runs right in front of the property.

“The property was owned by a wealthy gentleman out of Mooresville, and this was just his hunting retreat. He brought his clients up, hunted the land, and we found the property through a friend of a friend.”

The owner didn’t need the spot anymore, and his children weren’t interested in a hunting retreat, so the land went up for sale.

Krobisch explained that he and Hayes jumped on the deal even before their nuptials.

Melissa’s first husband was diagnosed with Hodgkin’s lymphoma at 38 and battled it until the age of 45, during which time she became pregnant and had a baby girl. Suddenly she found herself alone with a child still in diapers in 2013.

Krobisch was still reeling from a divorce, but then as the couple said, “Two people who never knew if they could fall head over heels again fell hard and fast; and they fell together.”

“She’s amazing,” he said. “She is great at hospitality. She is the light of my life.” She is a former gym owner and entrepreneur.

“We have a blended family,” he said. “I have two children from a previous marriage.” His son is 14 and his daughter 12, while Melissa’s daughter is now 9.

“We’re fortunate to have this place because they get to be kids and run around. And be part of business, too. They’ve actually seen the business come up and seen us build a business, which has been really good for them to learn from.”

Part of that growing a business is figuring out a scope for the project.

“We cleared land about two years ago (for a barn),” he said. “We were just going to have it as part of the farm, wine tasting. And then Melissa had the idea that we should host events and things like that, so we decided to finish it out and make it more of a full-on event venue. … It’s 3,000 square feet and we have another thousand square feet of porch front.

“We actually got married on the property in 2019 and had our friends and family up.”

If the vines haven’t been planted yet, how does the tasting room have any bottles to offer?

“We bought grapes from local farms and used another winery’s equipment — who had extra capacity — to make our wine,” he explained. Then as things progress, the site can get its own equipment.

“Our vineyard will be planted in spring 2021, and the winery will be built later in the year. We are aware that our first crop will be very small and we will need to still supplement with outside grapes for a few years. We plan to have a good majority of our own grapes at year three.”

As for what he and his veteran wine maker produced already, he said, “We actually have 11 wines. Everything from dry whites to dry reds.”

There is a sparkling Knockout Rosé, a grenache NautiLife Rosé, Cabernet Franc, Cabernet Sauvignon, Sangiovese (a dark and savory delight, scarce outside Italy, but thrives in North Carolina).

“Then we do a Fuego line, which is our sweet wines — Fuego is our dog. We have a Fuego Peach and Fuego Sangria.”

Where did the name for the vineyard originate? Serre (pronounced like “stair”) is one of the many names heard over the years for a red Italian wine grape also known by neyret, negret, neret gros and neret picciou.

Despite the clever name, the owners say they would rather have a laid-back, fun environment where people don’t have to know anything about the wines to enjoy them.

For more on Serre Vineyards, see the website at www.serrevineyards.com.