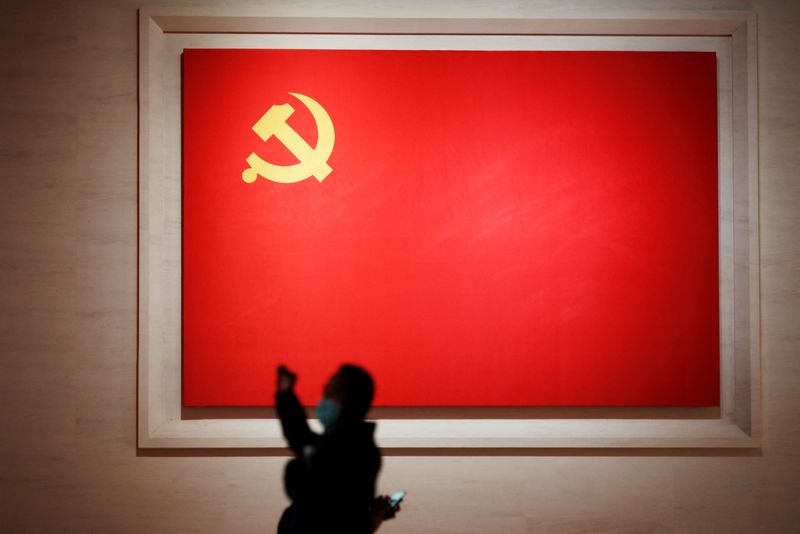 © Reuters. Visitors are seen silhouetted against a Chinese Communist Party flag displayed at the Museum of the Communist Party of China in Beijing, China October 13, 2022. REUTERS/Florence Lo

BEIJING (Reuters) – China’s ruling Communist Party will reshuffle its leadership when it holds a once-in-five-years Congress starting Oct 16, with Xi Jinping widely expected to stay on for a third term as general secretary, China’s senior-most position.

That break with precedent makes it even harder than usual to predict the makeup of Xi’s next Politburo Standing Committee, including who replaces No.2 leader Li Keqiang as premier when he retires from the post in March.

The makeup of the PSC – it now has seven members, but that number is not set in stone – matters because the party has traditionally practiced “collective leadership”, requiring all decisions of the highest importance to be put to internal vote.

Some potential scenarios and outcomes to look out for:

In the past, an incoming premier was typically no older than 67, had served as a vice premier, and had managed several provincial-level economies as party chief.

Both Wang Yang and Hu Chunhua tick those boxes, while the likes of Li Qiang and Ding Xuexiang have weaker credentials but are seen to have Xi’s solid trust.

China’s economic difficulties could tip the choice in favour of a more experienced economic hand, many analysts say.

Wang, 67, is chairman of the Chinese People’s Political Consultative Conference (CPPCC), a political advisory body. He ranks 4th on the current PSC and is the most senior among the candidates.

One factor not in Wang’s favour, some analysts say, is his perceived affiliation with the Communist Youth League, a once-influential group associated with Li Keqiang that has lost power under Xi.

Others argue Wang would have gained Xi’s trust after having kept a low profile and serving loyally alongside him in the PSC in the past five years.

Wang’s age would limit him to one term – a point in his favour, party-watchers say, as he would be less threatening in Xi’s eyes given that he would be unlikely to outlast Xi in a position of power.

Hu, 59, is one of four vice premiers and also rose through the ranks of the Youth League.

Though junior to Wang, he has chalked up substantial experience managing issues including agriculture and poverty alleviation at the national level, and regions including Tibet, Inner Mongolia and Guangdong province.

Hu is a decade younger than the 69-year-old Xi, which cuts both ways: Xi may be wary of promoting someone with a longer political runway who could potentially outlast or upend him. On the other hand, Xi may like his youth – and deference – in a Chinese system where seniority matters.

Even if he doesn’t get the premiership, Hu might still get a coveted PSC spot.

Scenario: A less-experienced Xi loyalist gets the nod.

If Xi is powerful enough, a trusted loyalist with less directly relevant experience might get premiership instead.

Li Qiang, 63, is Shanghai party chief and one of Xi’s most trusted acolytes, but his record was tarnished by the heavy-handed two-month COVID lockdown of the city’s 25 million residents.

Even if he does not become premier, he may still join the PSC.

As the ranking and only vice premier now in the standing committee, Han has premier-caliber experience but turned 68 in April and is thus due for retirement.

Some analysts suggest Xi might bend the age norm for Han, who has proven himself to be supportive and willing to play second fiddle to Xi.

POLITBURO AND THE STANDING COMMITTEE

The party’s highest echelon of power, the Politburo Standing Committee, could get three newcomers if retirement norms hold and the PSC remains at seven members.

Over half of the 25-member Politburo could be replaced.

After Li, 67, steps down from the premiership he could leave politics or, following a 1998 precedent, remain in the PSC as chairman of parliament, the National People’s Congress, China’s third-ranking position.

Some party-watchers speculate Li, whose power as premier has diminished under Xi and whose more reform-minded economic approach differs from Xi’s, would prefer to retire fully.

Others suggest Li would not leave as that may give the impression of rift among leaders.

Other Xi acolytes seen to have good odds for promotion, either within the Politburo or onto the PSC, include top Xi aide Ding Xuexiang, 60; Chongqing party chief Chen Miner, 62; Li Shulei, 58, the party’s No.2 propaganda official; and top security official Wang Xiaohong，65.

Scenario: Most Politburo seats turn over.

Economic tsar and Vice Premier Liu He, 70, is due for retirement. Pundits suggest he could be made vice president, a post with no strict age limit. He is expected to be replaced by He Lifeng, 67, China’s state planner head, and long-time ally of Xi.

The only woman in the Politburo, Vice Premier Sun Chunlan, 72, is also due to retire. The best-positioned woman to replace her is Shen Yiqin, 62，a member of the ethnic Bai minority and party chief of impoverished Guizhou province.

China’s top career diplomat, Yang Jiechi, 72, who deputises for Xi in the party’s foreign affairs decision-making body, is also due to retire. Foreign Minister Wang Yi, 68, is tipped to replace him.Xu Qiliang and Zhang Youxia, both military chiefs in the Politburo age 72, are also due to retire. Potential replacements include Navy admiral Miao Hua and Army general Liu Zhenli.

Scenario: PSC newcomers – all or none.

Pundits don’t rule out a low possibility of no newcomers to the PSC at all – a strong signal that Xi wants to stay on beyond a third term.

Another extreme scenario is for Xi to swap out all existing PSC peers with fresh faces, who would be younger and more subservient.

What to Know Before Taking a Business Loan – ShoeMoney

when process eats away at culture

Hydraulic Jack – An Important Instrument in The Construction Industry & Workshops